The beginning of this, the third decade of the new millennium, may have started out rather bleak, but it does not mean that things like innovation or advances in technology have come to a grinding halt. In fact, quite the opposite is true. As we find ourselves in the midst of the Fourth Industrial Revolution (more commonly referred to as Industry 4.0) the adoption of automated machinery in the manufacturing sector shows no indication of slowing down. But how is it that manufacturers can integrate PLCs – a key component of manufacturing developed almost 60 years ago – with contemporary automation and robotics solutions to create the smart factories of tomorrow? Let’s take a deeper dive into that relationship. 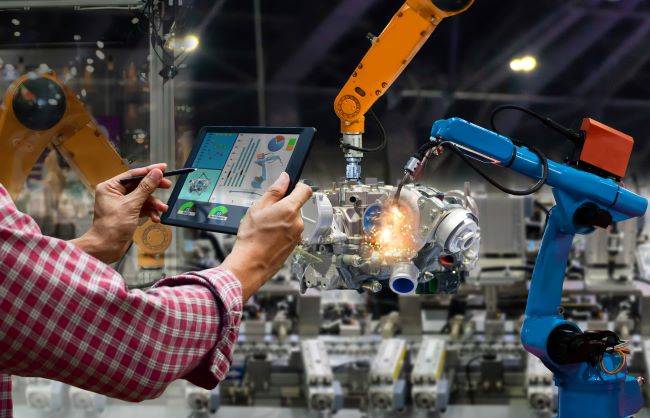 If you haven’t heard about them before, PLCs (Programmable Logic Controller) are industrial computers that make process automation possible. To put it simply, they do this by essentially converting a series of inputs into outputs (a signal is received from a device on the factory floor and the PLC’s programming communicates with the device on which action needs to be completed). The PLC’s commands can range from the very simple to the complex, covering things like stopping a conveyor on which no parts are travelling to save power, to timing the merges of products on a line so that they don’t come into contact with another or cause a jam.

It is remarkable that a device that was invented before astronauts first landed on the moon is still so widely used right alongside cutting-edge manufacturing technology and robotics, and the fact that they are still in use speaks to the versatility of the PLC. When they were first introduced, the idea was to alleviate some of the headaches caused by hardwired relay logic systems. Specifically, relay logic systems required massive amounts of wiring, and the relays simply couldn’t handle the workload. PLCs offered a far less complicated alternative.

Having passed muster in the automotive sector, the PLC started being used for other applications and can now be found in just about all industrial environments. No matter how sophisticated or autonomous a factory becomes, there will always be a device that can take input signals and issue an output command. The PLC has filled this role for six decades and while the PLC is technically a part of the Third Industrial Revolution, it’s clear it will continue to be a necessary piece of equipment for Industry 4.0. Interestingly, it seems an emerging application for PLCs in the factories of tomorrow is the collection of data for analysis so that processes can be improved upon and efficiencies identified. Clearly, having PLC training is where the smart money is for someone in the manufacturing sector who may be worried their current role faces obsolescence in the face of automation.

Automation has long been viewed as a precursor to the end of manufacturing jobs - and while that may be true to a very small degree, there are plenty of ways to mitigate job loss. For those looking to remain in their respective industries, signing up for some robotics training or enrolling in technology courses online are two very good ways to ensure one remains gainfully employed as the industrial sector continues.

It is easy to see why some people feel as though automation is bad for the economy. Automation, in a broad sense, consists of installing the kind of machinery or equipment that can operate, well, autonomously. To the worried worker, this likely conjures images of a factory floor only scarcely populated with just a few qualified technicians to keep the whole operation running. Fewer jobs, higher unemployment, less economic growth. But that view is wrong (similar claims have been made about each Industrial Revolution respectively, but history has shown that advances in technology have created more jobs and has been better for the economy).

The truth is there are a great deal of inefficiencies inherent in human-operator decision making and manual command and response operations that occur on the factory floor. These inefficiencies are costly to the manufacturer, stifle the growth of a business in a hyper-competitive landscape and are a drain on profitability. The gradual adoption of mechanized equipment and programmable logic controllers significantly reduces those inefficiencies and costs. Though that may sound like it translates to fewer job prospects, there are a great deal more opportunities being made available to employees that are considered more important and rewarding. Welding, assembly, lifting, cutting, painting, sealing, and packaging were once tasks performed exclusively by the deft hands of a human workforce, but these tasks are dangerous, repetitive, and don’t allow the worker to reach their potential. After taking an online technical training program or online industrial training program to upgrade their skill set, a manual labourer could find themselves servicing the autonomous equipment that does the repetitive tasks or programming the logic that controls them.

Robotics and automation are often discussed synonymously, but robotics is actually a subset of automation. Shortly after the Second World War, the booming industrial sector experienced a drastic need for equipment capable of mass-producing consumer and industrial goods. Of course, industrial robotics are complicated devices; combining mechanical movement and computer software they were and continue to complete tasks far more quickly and accurately than even the most proficient human worker. As the field of robotics progressed, iterations of “artificial intelligence” began to make an appearance. In the world of robotics, AI is used in conjunction with physical robotic hardware to simulate the way a human would apply reason, learning, and the manner in which objects are moved.

Robots, though often maligned as technology destined to replace workers, often work collaboratively alongside human workers, helping them complete the more repetitive physical tasks of their jobs safely. While many robots and cobots are fixed firmly to the factory floor, destined to remain in one position during their lifetime, some robots are designed to move about more autonomously. For example, distribution centres employ picking robots that gather products for order fulfillment with little human involvement. These robots are able to move around safely alongside their human counterparts thanks in part to the use of numerous sensors.

The Way of the Future

As the age of Industry 4.0 continues, factories will re-imagine news ways in which to use their PLCs with automation and robotic technologies. The prevalence of robotics and autonomy will explode, but so too will the opportunities for displaced workers. In short, PLCs, automation, robotics, and highly skilled workers will all play a vital role in the continued evolution of the smart factory.